Over a year and a half after Malaysia Airlines Flight 370 mysteriously disappeared, we are still left with very few details about what may have happened to cause the plane to go missing. The biggest development has been a piece of debris recovered this summer that investigators can say “with certainty” belonged to MH370. However, recovering data from the plane’s black box or passengers’ cell phones could provide more details about the events that leading up to the crash. Even after a device has experienced severe water damage, recovery efforts could prove successful and lend insight into what happened to the plane.

There has been a lot of curiosity surrounding the mysterious disappearance of Malaysia Airlines Flight 370 somewhere over the Indian Ocean. For almost seven weeks, investigators from different countries have been searching for the wreckage in hopes of providing answers to the families of the passengers and the rest of the world about what exactly happened to the flight.

While many have been focused on recovering the plane’s black box and the data it contains, there has been little talk about what information the passengers’ cell phones might reveal. Pictures, unsent text messages and undelivered emails composed as the plane went down might provide invaluable information about the incident while helping to bring a sense of closure to the passengers’ families.

CNN sought to answer the question of whether or not recovering data from the passengers’ cell phones is possible. Should the wreckage be found, it will likely have been submerged nearly 2.5 miles beneath the Indian Ocean for weeks, which would be an extraordinarily harsh environment for any electronic device. CNN decided to conduct an experiment and reached out to 4Discovery and Tetra Defense, formerly Gillware Digital Forensics, who collaborated on the recovery. 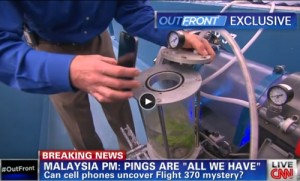 The test began by recreating the conditions at the bottom of the Indian Ocean, where experts believe the plane’s wreckage to be. Chemist Allen LaPointe and fish biologist George Parsons of Chicago’s Shedd Aquarium used salt water from their ocean floor exhibit to create a chamber designed to simulate the temperature and pressure of the Indian Ocean’s floor.

Next, the cell phone’s transmission was turned off and CNN correspondent Ted Rowlands captured some videos and still photos. He also attempted to send some text messages and emails, which would be stored in the outbox waiting for a signal to send. Such data from a cell phone of one of the passengers might give investigators clues about what happened in the plane’s final moments.

The phone was then placed in the pressure chamber, and after one week, 4Discovery removed it and began to attempt recovery. They removed the control board from the cell phone and cleaned it using an ultrasonic cleaning device to remove the salt deposits. Unfortunately, the circuitry in the control board was corroded beyond cleaning, so data could not be extracted directly. To recover the data, a more invasive approach was necessary, so Gillware stepped in to complete the recovery. 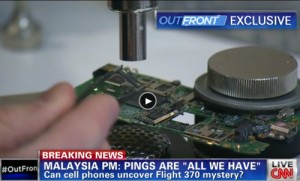 Tetra engineers removed the NAND flash memory chip and cleaned it for reading. They placed the chip in a compatible adapter and performed a raw dump of the contents using Tetra-partner Gillware’s proprietary recovery software utilities. The raw data was extracted and 4Discovery performed the final analysis.

Due to some damage to the NAND flash chip, there was some minor corruption to a few of the pictures and videos, but they were largely in working order. Additionally, all of the text messages and emails in the phone’s outbox were fully recovered. 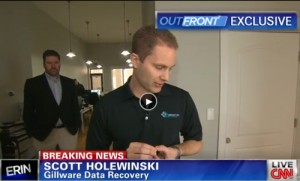 If the flight were found on the floor of the Indian Ocean, the condition of the passengers’ phones would not be exactly the same as in the experiment, but Tetra and 4Discovery believe enough data would be recoverable in that situation to be useful. Not only could this help investigators determine what happened to the plane, but it could help the passengers’ families find some peace by providing them with the last communications of their loved ones.